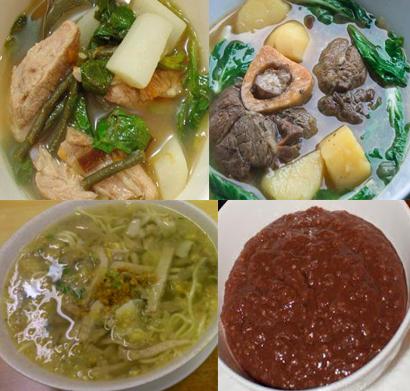 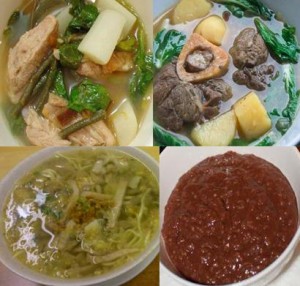 Manila – Rain, rain go away… It’s that soppy time of year again! When the raindrops start their pitter-patter on your roof then crescendo into a waterfall roar, home becomes the location of choice. You dig in and hibernate, grab a paperback (or e-reader or tablet), tune in to whatever the TV has to offer, or simply watch the rivulets that flow down your windowpane. Then your stomach suddenly comes to life, grumbling for comfort food. And you gladly oblige, of course.

The Philippines has many delicious dishes to offer when the craving attacks. Let me give you a glimpse of four staples of the “irrigation” season.

Sinigang is a sour-based soup made with shrimp, fish, pork, or beef, and mixed with vegetables such as tomatoes, onions, taro, daikon, eggplant, water spinach, yardlong beans, and green finger peppers. The traditional souring agent is tamarind; guava or calamansi may also be used instead.

Milkfish in guava is a highly recommended sinigang variant. Guava when cooked gives the soup the standard sourness, and lends it a tinge of sweetness as well. Thus, the fruit blends perfectly well with milkfish and the vegetables. If you don’t like the strong taste of guava, you can always go for the the ever-popular sinigang sa sampalok (tamarind). For me, the main ingredient of choice is shrimp. By the way, any type of sinigang is best served with plain boiled rice.

Hmm, sinigang is a mouth-watering super soup in any of its many adaptations. With a bowl of it in front of you, who cares if it drizzles or pours?

Champurrado was first introduced to the Philippines by Mexican traders during the Galeon Trade. They called it champurrado Mexicano. Somewhere along the way, Filipinos added rice to the recipe, and champorado was born.

Champorado is sweetened chocolate rice porridge. Glutinous rice is boiled together with chocolate or cocoa powder and sugar until it is rich and thick. Milk is added to give it a creamier taste. Champorado is usually paired with salted fish — a combination that’s hard to imagine — but the match is perfect. The burst of flavors in your mouth is quite unforgettable, and you will crave for it again and again. This treat is usually breakfast fare, but it can be served as a snack, too. You can eat it hot or cold, but on rainy days, hot champorado is unbeatable.

Beef Bulalo is a classic Filipino dish — a specialty from the province of Batangas (in southwestern Luzon), which is famous for its cattle industry. Batangas beef is sought after all over the country.

Bulalo is beef shank soup with the bone marrow intact. The natural flavor is brought out by slowly cooking the beef until it is tender; corn, potatoes, cabbage, garlic, pepper, and onions are then added to the concoction. The bone marrow gives the broth a richer taste. A bowl of hot bulalo perks up the wettest day.

La Paz Batchoy originated from La Paz, Iloilo City — thus the name — a specialty developed back in the 1930s by Teodorico Lepura. He learned how to make La Paz batchoy while working for a Chinese merchant and transformed it into the famous noodle soup we know today. The word batchoy was derived from the Fookien Chinese words ba chui, which mean pork soup.

Philippine cuisine has evolved from diverse influences. Hispanic, American, and Chinese and other Asian regions lent us their culinary favorites, which we innovated into unique and distinctively Filipino recipes by adding local ingredients.

The four food craves we just drooled about are available in lots of Filipino restaurants, but almost all Filipinos boast about their own versions (“the way grandma used to cook it”).

It’s still pouring outside, I guess I’ll just stay home and cook. What will it be? Let’s see: champorado for breakfast, bulalo for lunch, La Paz batchoy for merienda, and sinigang for dinner. Yummm!