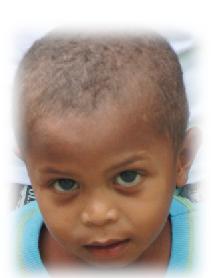 The nomadic Mamanwa (also spelled Mamanoa) people are one of the oldest tribes in the Philippines. They were previously believed to be a subgroup of the Negritos, but after numerous physical anthropological studies, they are now believed to be distinct from the Negritos. This frank but peace-loving tribe populates the areas of Panaoan Island, Southern Leyte, Agusan del Norte, Surigao del Norte, and Surigao del Sur. As of 1990, there are approximately 5,000 speakers of their language of the same name Mamanwa, which is under the umbrella Bisaya languages.

Similar to the Negritos, Mamanwas are typically dark-skinned and bear small frames. They also possess curly hair and black eyes, and are mostly petite, ranging from 1.35 to 1.5 meters in height.

Traditionally, hunting was heavily part of their customs and traditions, though this tradition has gradually disappeared. Instead, they now set up bayatik (spear traps) and gahong (pit traps) to catch animals in the forest, and they eat wild fruit, nuts, honey, and python meat. They also forge labor agreements with other nearby groups and weave baskets and hammocks.

Negritos and Aetas: The Mamanwas’ Origins

The Mamanwas are part of the bigger Aeta communities. Their name is derived from the terms man which means “first” and banwa which means “forest,” which together translate to “first forest dwellers.”

Before the Mamanwas arrived in central Samar Island, it is said that there had been an earlier Samar Agta Negrito group residing there. However, once the Mamanwas came, the Samar Agta then switched to Waray-Waray or Northern Samarenyo, and possibly even integrated with the Mamanwa tribe.

The nomadic, mountain people Mamanwas live within communes that are typically composed of three to twenty households, which are located either atop a high ridge or deep within a valley. This arrangement is not completely by choice; they are mostly forced to settle in the hinterlands due to the invasion of heavy industries in their settlements. Here, they continue to practice their unique customs and traditions.

The said communities are headed by the eldest and most respected males, and such leadership roles cannot be passed to their kin. Mamanwas have high regard for their elders, as these people are the ones who exert control over their judicial affairs and maintain peace and order within their tribe. This socio-political system is an informal one and mainly stems from their general traits of being frank, their lack of desire for power, and their being peace-loving.

In such communes, the area where the Mamanwas dwell is frequented by several tribes, resulting in intermarriages. This integration has thus also resulted in shared socio-political systems, religious practices, and cultural beliefs. One such integration is the belief in a supreme being Magbabaya shared by both the Mamanwa and the Manobo tribes. This belief extends to the spirits, unseen beings, and guardians of their environment, whom they accord with the deepest respect else they believe these beings will bring down a plague or unfortunate events on them. Such integration also extends to their dialects, which both tribes understand.

Arguably the most remarkable thing about the Mamanwas is how they consistently protect their cultural identity through the conservation of their territory. They do this together with the Manobo tribe, which is why within their ancestral domain is a conservation area called the Mamanwa-Manobo Indigenous Community Conserved Area (ICCA).

The areas being protected are dubbed Binantazan nga Banwa and Binantajan nu Bubungan, with the words binantazan and binantajan both translating to “protected,” and banwa and bunungan both meaning “forested mountain.” According to the ICCA Registry, these areas total 1,546.5 hectares; the primary dipterocarp forest is 1,397.14 hectares while the secondary dipterocarp forest comprises 149.38 hectares.

The center of the said protected area is the revered Mount Panlabao. It is the highest peak within the ancestral domain and is described as inereg by the Mamanwas, or inajagan by the Manobos. Both words imply that the area is so meaningful that they fear its destruction. As a result, both the Mamanwas and Manobos’ spirit dwellers keep the mountain to themselves so that no one can harm it, and a ritual is always conducted whenever anyone goes near its sacred premises.

It can be concluded then that although modernity has influenced most of the other ethnic groups’ customs, the Mamanwas’ culture remains mostly intact. To date, they still go back to their Binantazan nga Banwa for their primary needs such as water, food, medicines, shelter, and protection.