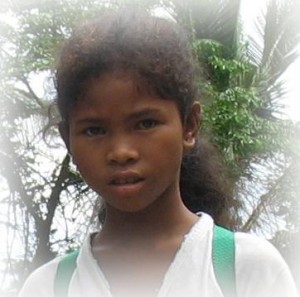 Probably the most scattered Mangyan people are the Iraya Mangyans, who can be located in Abra de Ilog, Mamburao, and Paluan in Occidental Mindoro, and in some parts of Puerto Galera, San Teodoro, and Baco in Oriental Mindoro. They are one of the eight Mangyan tribes, though compared with the other Mangyan tribes who have mostly retained their cultures, the younger Iraya Mangyans are slowly becoming more accustomed to using Tagalog and have now mostly discarded their animistic religion in favor of Roman Catholicism, Evangelical Christianism, and Iglesia ni Cristo. Nevertheless, the 10,000 or so Irayas still retain their language of the same name, Iraya.

The Iraya language is considerably different from the languages of Tadyawan and Alangan, two of the other Mangyan tribes. Iraya as a language is considered a still-developing language, as its speakers use the language in a strong and healthy manner while incorporating some Tagalog. Their script is also distinct from those of the other Mangyan tribes, though it is hard to maintain and quite uncommon.

Some dialects of Iraya are the Abra de Ilog, Alag Bako, Pagbahan, Palauan-Calavite, and Pambuhan. These five dialects share the basic vocabulary and grammar of Iraya, though the preferred use of words, expressions, and pronunciations of particular words may differ from the general Iraya vocabulary. Furthermore, Iraya spoken in the lowlands tend to borrow words from Tagalog, while Iraya spoken in the lower slopes of Mt. Halcon tend to borrow words from the closely related Alangan language.

Interestingly, there is a colloquial register Ibaba that is generally used by Irayas, as well as a quasi-liturgical speech register Ita’as. Ita’as is used in power songs and is only understood by shamans of Occidental Mindoro.

A typical Iraya has dark skin and curly hair. They make it a habit to come down from the mountains and join the lowlanders’ Christmas season festivities, as a good number of Irayas have converted to Christianity.

Aside from the modern employments of their educated members, the Iraya traditionally sell handicrafts, as well as trade food and goods with locals.

There are two kinds of baskets associated with the Irayas. The first is a household basket that is hexagonal in shape and measures around 18 to 20 centimeters in diameter. It is composed of soft and narrow strips of the buri palm leaf and contains nito strips as well.

The second type of basket is an open grain type made of bamboo strips that are first blackened and then dried.

Traditional Iraya clothing consists of loincloth bahag fashioned from a tree bark, the belt kaitong and the headband talawak for males, and skirt-like covering tapis made from bark, the belt lingob and breast covering sagpan or pamanpan for females. Both males and females wear necklaces kudyasan that are made from tigbi seeds, and earrings panalingnaw. However, at present, most modern Irayas are dressed the same way as with lowlanders.