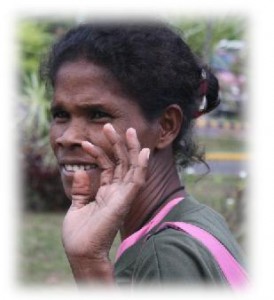 The first inhabitants of the Philippine archipelago were the Ati people, a Negrito ethnic group who settled in Panay Island. They are notable for their round dark eyes and dark-complexion. They are said to have first arrived in the Philippines some 20,000 to 30,000 years ago from Borneo by foot through an isthmus, which is now part of Palawan.

The aboriginal Atis speak the language of the same name Ati, also called Binisaya nga Inati, which is spoken by approximately 1,500 people. A variety called Sogodnin is spoken by some of the population in northern Panay, and Atis can also speak Kinaray-a and Hiligaynon.

As what is to be expected of the first group of Filipinos in the country, Atis used to practice rich customs and traditions that are uniquely theirs. However, in search of better livelihood opportunities, the Atis relocated to highly populated cities. Unfortunately, this mass relocation has resulted in Atis struggling to preserve their traditions.

One way to distinguish Atis from other Negritos located elsewhere is by their names. Ati is what the Negrito ethnic group of Visayans is called. They are scattered throughout Boracay, Panay, and Negros. Genetically, they share a link with the other Negrito groups, such as the Aetas of Luzon, the Batak of Palawan, the Agta of Sierra Madres, and the Mamanwa of Mindanao.

Festivals are deeply embedded in the majority of Filipino ethnic groups’ cultures, and the Atis are no different.

The most famous attraction that Atis can offer is the Ati-Atihan Festival, which as the name suggests, honors who they are as people. The festival itself commemorates when the Atis helped the Spaniards conquer Aklan and the Visayas and they were gifted a Santo Nino statue as a reward.

Another festival they have is the Dinagyang Festival of Iloilo City. Here, Atis form tribus and perform dances accompanied by drums as a commemoration of the Malays arriving in the Philippines and later buying Panay from the Atis.

A Blast from The Past

The Atis of the past believed in animism, which involves mainly believing in good and evil spirits. The Negros Atis refer to these spirits as taglugar or tagapuyo, which translates to “inhabiting a place.” These nature spirits guard the rivers, the sea, the sky, and the mountains. They generally bring about comfort, but when a follower has committed an offense, they can as easily turn vindictive and punish the wrongdoer by inflicting them with disease.

The Ati women used to wear simple wraparound skirts, which are sometimes made out of bark cloth, while loincloths were worn by men. Jewelry came in the form of flowers, and peculiarly, animal bones or pig teeth.

The Atis are known for practicing herbal medicine, with an unusual custom of removing leeches from one’s body.

The Atis used to be nomadic, with Panay Atis being the most mobile. To date, the world-famous Boracay is still their ancestral land, which they call Takbuyan.

The present Atis go with what the changing times dictate. There is an effort on their part to preserve their unique traditions. However, as most ethnic groups of today, it is near-inevitable not to be influenced by modernity. This is why the Atis’ spirituality, livelihood, diet, medicine, ancestral domains, beauty standards, and education have now changed to fit into the modern world.

Not all these changes are negative, though. Some of the changes the Atis have made are favorable to them, such as the way their members are now more likely to pursue higher education. Still, other changes have affected them more harshly, such as their perceived need to conform to modern society’s mestiza beauty standards of fair complexions and straight hair. The same can be said for their abandonment of animism as a religion in favor of Christianity.

Today, Atis are not secluded anymore in the mountains of their main domains but are visible in major cities as members of a more progressive civilization.