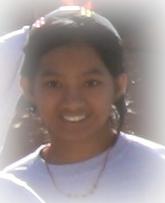 One of the eight tribal groups under the umbrella term Mangyan is the tribe of Alangan who are known for their unity, which is especially displayed by their balaylakoy or a house they share with up to 20 families. They can be found mostly in Mount Halcon in northern Mindoro Island, while some Alangans reside in the Lantuyan and Paitan settlements.

The term Alangan was coined after the mountain slopes and river in the upper Alangan valley.

The Alangan people reside in the municipalities of Sablayan in Mindoro Occidental Province, as well as Naujan, Baco, San Teodoro, and Victoria in Mindoro Oriental Province. There are roughly 2,150 speakers of the Alangan language. The dialect Ayan Bekeg is spoken by people on the northeast slopes of Mount Halcon, as well as in Casague in Santa Cruz, and Kulasisi in Sablayan, both in Occidental Mindoro.

The Alangan people are described as having medium build, dark complexion, and straight and long hair. Their faces are round, with their teeth stained deep red to black from chewing betel nuts. This practice of chewing said nuts is done by all Mangyan groups.

An Alangan woman will usually be seen wearing lingeb, a skirt made of long strips of woven nito or forest vines and is twisted at the abdomen, and a g-string called abayen. Their upper body is covered by ulango, which is made from the leaf of the wild buri palm, and sometimes limbutong, a red kerchief, is worn over it. Men, on the other hand, wear g-strings that have trimmings in front.

The Alangans are mostly agriculturists of upland or the kaingin system, which is a slash-and-burn method of farming. This swidden farming is composed of eleven stages, two of which are the agait or firebreak-making and the agpagamas or fallowing.

One exceptional tradition by the Alangans is the balaylakoy, which has seen changes throughout the centuries.

A balaylakoy is a big wooden house shared by several Alangan families. With a fire burning at the center, it is a place where people of all ages share stories, and most importantly, where indigenous rituals and gatherings are performed and celebrated. Here, they hold the pamago, where they rejoice in their bountiful harvest, and each member pounds rice to remove the husk in the palangganan at the center of the balaylakoy.

Sadly, due to external influences, many Alangan families have now moved to individual houses, and their tradition of living in balaylakoy has started to die down. Natives saw this change as a threat to the preservation of their distinct culture, and thus, by the Kapit-Bisig Laban sa Kahirapan-Comprehensive and Integrated Delivery of Social Services (Kalahi-CIDSS) through the Department of Social Welfare and Development (DSWD), they have started rebuilding modernized balaylakoys that will have concrete pillars, wood and bamboo for its walls and flooring, two extra rooms (as opposed to a traditional one-room balaylakoy), and a toilet.