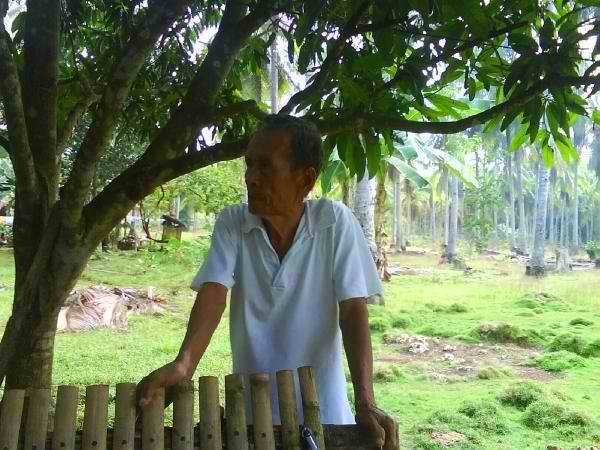 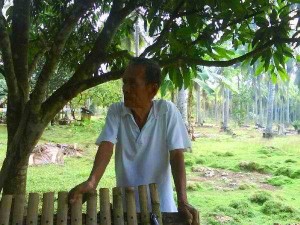 QUEZON CITY, Philippines – In the heart of Davao Gulf in southeastern Mindanao lies the Island Garden City of Samal (IGACOS), homeland of Sama indigenous group. Popularly known as simply Samal Island, IGACOS can be reached by ferry boat from Davao City. Oral and written accounts passed down from generation to generation indicate that Samal Island used to be known as Pu, and has been inhabited by the Sama since time immemorial.

The Sama indigenous group is mistakenly thought to have originated from Mandaya, Mansaka, and Muslim groups. Samas insist, though, that they are a separate entity with distinct forms of music, art expression, and tribal rituals. Individuals used to be named after the living things around them, and each name was complemented with the term Samal, which served as their family name. For this reason, it was easy to identify the members of the tribe among the other indigenous groups in neighboring islands.

Although the Sama originally practiced animism, their belief system was altered in the 18th century — the onset of Christianization in the area. As tribe members were baptized into Christianity and adopted Spanish names, their indigenous names gradually disappeared.

During the early 19th century, a group of Maguindanao Muslims led by Datu Bago attempted to take over Pu. Datu Taupan, the leader of the Sama, repulsed the invaders. Datu Taupan was succeeded by his son, Datu Taganiyog who was the sole head of Samal Island long before it was divided into three districts. Datu Taganiyog was joined in conflict management and resolution through consensus by other leaders in Pu: Datu Budas, son of Allaw of the West; Datu Dawang, son Taumbo of the East; and Datu Libudan of the North.

Since it is separated from the rest of Davao del Norte, Samal Island became a district municipality during the American colonization. Subsequently, the municipalities of Babak and Kaputian were created. The division was based on jurisdiction. Babak came from the Sama phrase awon babak, which pertains to Talisay-like trees called babak that grew abundantly in the island, which are now extinct. The trees were used as landmarks for the indigenous people’s trade centers. On the other hand, Kaputian was derived from puting-Balas, a local term that describes the white sand shorelines of the district.

The third district was named Samal, and was the political center of the city. One of its barangays, Peñaplata, was originally named Kasukan, which means “cornered” or suok in Bisaya, because of its geographical location. Kasukan was changed to Peñaplata during the Spanish regime because of the abundance of pinya (pineapple). The natives bartered pineapples for plata (silver coins); thus the name Peñaplata.

Sama’s rich cultural heritage is gradually fading into extinction as a result of the in-migration of settlers (mostly from the Visayas), an emerging bias against the lumad, and the trauma or discrimination they suffer for being indigenous. However, some cultural practices are still alive among the Sama.

Ancient Sama tribes believed in anito or spirits. Rituals for panawagtawag or prayers asking for the anito’s intervention are performed only by balyan, usually through dancing. Although Sama still believe in anito, they are affiliated with one of the three major religions that exist in the island: Roman Catholic, Protestant, and Islam.

Today, the system of beliefs of the Sama has blended indigenous and contemporary religions. They still believe that all things in the world are owned by the Magbabaya (Supreme Being). If a calamity hit a neighboring area, the Sama would perform a panawagtawag to ask the spirits to spare their territory. Come planting season, they believe that the best time to plant crops is during low tide, and leafy vegetables and fruit trees, during high tide. It is bad luck if the sound of the alimukon (a local bird) comes from behind; the person who hears it should not leave the house. It is also bad luck to leave a house immediately after somebody sneezes.

Food gathering is still very common among the Sama of IGACOS albeit the introduction of the science of agriculture. For this activity, indigenous strategies and methodologies, and rituals presided over by a balyan are practiced. Similarly, indigenous beliefs continue to be observed. However, barter has gone out of fashion, replaced by money as the common means of exchange.

Before fishing or hunting excursions, a ritual called dugsoon is conducted, presided over by the balyan, using materials such as buyo (betel nut), apog (pounded limestone), and tabako. Freshly caught fish would be spread on a big rock and prayed over by the balyan. The liver of an animal caught by the hunters would be placed over a fallen tree trunk and the balyan would ask the permission of Magbabaya before the animal is brought home for food.

The Sama use various hunting methods and tools. A biyawo fruit is peeled, sliced into small pieces, and placed inside a chunk of camote for fish bait. When eaten by a fish, the bait explodes, paralyzing the fish. The Sama’s other methods of fishing are described in Table 38.

Music is one of the means by which the Sama express their emotions toward other people or to their gods. They sing an estiharo, a song of thanksgiving, when honoring a person. When a man asks permission from a woman’s parents to court their daughter, he has to perform a pangayo. The Sama also have songs that narrate significant events in their lives or history, such as the tuganuwan.

The music can be performed by anybody who knows the songs. Some of the musical instruments used during dances were the agong and gimba; and during festivals and other special occasions, the koglong, kubing, patawali (flute), and kulintang. Only the balyan performs ritual dances, usually during the Pangapog Festival (thanksgiving celebration) or Tawo (death anniversary); the instruments used are the agong and gimba. Other dances performed by the Sama or their balyan are sagumbata (dance of happiness), tagonggo (using nine pieces of agong [one set] and a gimba), and lindog sayawan (for warding off bad spirits that cause sickness). Unfortunately, at present, few know how to perform the music. Some only perform for intermission numbers in cultural presentations, and the performances are sometimes modified to the point of misappropriation.

The dancing accessories of a balyan are the kongkong, a small gong placed in the belt; kuyab, a hand fan; lampayon, a red handkerchief; and pawtina, a breast plate. The balyan also wear a balyog, a necklace made of tiny seeds.

One of the rituals done by the balyan is the sayawan, which is done inside the house. The materials used include a piece of bamboo, buyo, apog, rice, and seven eggs for offering to the spirits. It is performed for good harvest and good health (healing of the sick), usually for nine consecutive nights.

Another ritual is the pagbana, which is performed outside the house. The balyan uses the bagaybay flower, a chicken with black or white feathers, cooked rice, boiled eggs, tabako, betel nut chew, and basi/shio hok tong. The ritual is performed when necessary.

There were numerous beliefs surrounding marriage and its rites. When a man decided to marry a woman, his parents gave the bride-to-be a dowry, such as a sleeping mat, pillows, mosquito nets, and cloths. If the woman decided to marry another man instead, the dowry would be reclaimed by the would-be parents in law. On the day of the wedding, the groom changed his clothes in a neighbor’s house. The wedding ritual was performed by the balyan and offerings for the spirits were prepared. The banquet food depended on the request of the bride’s parents. At present, however, many indigenous marriage practices are no longer done due to legal conflicts with the mainstream court.

The datu served as the judge and prosecutor of the Sama, although decision-making was the combined effort of the leaders of each clan, who sat down to discuss possible solutions by consensus. The penalty or punishment depended on the offense. Punishments for minor offenses included hard labor; for major cases, the offender was stabbed to death.

For the Sama tribes, the biggest sin was the act of stealing another man’s wife. To resolve the issue, the accused man had to pay a dowry to the husband or be killed. A hearing was also facilitated by the datu. The most common way to decide on a case was to have the suspects to dip their hands in boiling water. Whomever’s hands burned first was declared guilty. Another way was by letting the suspects “drown” in the sea; whoever came up for air first was considered the culprit.

The balyan served as the main healthcare provider of the community, especially in healing the sick. He or she would perform lindog kadyawan, a ritual dance. The balyan used materials such as piece of lindog wood, betel nut chew, apog (pounded limestone), cooked rice, and seven eggs as an offering to the spirits. The balyan was the tribe’s hilot (midwife), and assisted women during labor. The expectant mother was given a boiled bark of wood called hagdag uwak found south of the house.

Burial custom dictated that a dead person’s coffin be made out of duldul wood. A dead person was not embalmed; instead, a heap of soil was placed inside the coffin under the body to minimize its stench. People were not allowed to bring any foamy drinks, such as tuba (coconut wine), to the wake. Fruits were not allowed either, especially ripe banana and jackfruit, as they would counter the curse and the body would stink. The way the body was buried depended on the cause of death.

During burial, the balyan performed a ritual called guwang. To avoid another death in the family, a coconut tree would be cut or plates and glasses would be broken while the coffin was being moved out of the house. A pail of water was then poured on the stairs while making sure that the coffin did not get sprayed.

The Sama had games like bunget (wrestling), busog (archery), and bangkaw (hunting contest). Nowadays, however, these games are practically forgotten; the youth no longer engage in them.

Sama’s ancient houses, called tambobong, were made of rounded timbers for posts, anahaw leaves and lumbia for roofing, rattan strips for fastening joints, inak-ak and the bark of Lawaan tree for walling, and patikan (indigenous palm tree) for flooring. Traditionally, they made use of the resources around them in crafting containers and carriers that they could utilize for storing food and general use around the house. The resources included fibers, such as rattan, abaca, and cotton.

Up to the present, there are some sites within IGACOS that the Sama consider sacred. They include:
• The tombs of the first datus: those of Budas in Kaputian; Taupan, in the Peñaplata Public Cemetery; and Taumbo, in Benoling;
• The Benoling River, because it is the main source of water in the island and it served as a place of worship, where the balyan performed rituals; and
• Caves, where the balyan performed rituals.

The roots of trees and other herbs found inside the caves, sprouting from their walls and crevices, are concocted as herbal medicine. Sadly, though, as the Sama perform fewer the rituals, these sites are being trespassed, illegally acquired as private properties, and developed as tourist attractions.