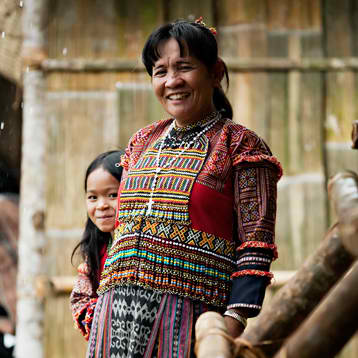 QUEZON CITY, Philippines – Consisting of both the non-Christian and non-Islamic, the Mandaya are found throughout Davao Oriental and Davao del Norte, Mindanao. Their name denotes the “first people upstream” and derived from man “first” and daya “upstream or upper portion of a river”. They are shifting cultivators who depend largely on swidden farming (slash-and-burn) and supplement it with fishing, hunting-gathering, and planting of abaca as a cash crop. The Mandaya family structure is traditionally paternalistic with the father seen as the head of the family and the sole provider of the family. The mother, in turn, takes care of all household chores, while simultaneously, looking after her husband’s and children’s needs; it’s also her role to rear the children in accordance to tribal practices. Major decisions are made jointly. Also, Mandaya parents undertake the role of preserving and handing down ancestral heritage onto their children.

Aesthetics and the arts rank high among the Mandaya; their metalsmiths excel in fashioning exquisite silver and brass ornamental items (much owed to their contact with Muslim groups), as well as, weaponry. Examples include the balladaw (steel dagger), kakala (bolo), likod-likod (single-bladed kakana), and wasay (ax for cutting wood or for self-defense). Mandaya jewelry, on the other hand, are fashioned at home pending the availability of material(s). Jewelry is used as a measure of one’s socio-economic status among the Mandaya women; no young Mandaya woman, single or married ventures out without donning a piece of jewelry. Oft times, silver was used for fashioning jewelry; brass, in the form of brass casting, was copied from the Muslims. Music is also an important component of their culture, oft times incorporating various musical instruments and dances in their celebrations and rituals. Mandaya riddles and proverbs were often retold as folk songs that reflected the people’s collective attitude towards life and the world. Two such examples (that have remained within the native repertoire) are the oyog-oyog (lullaby) and the bayok (love and adventure songs). Mandaya costume motifs were characterized by block designs, line patterns, rickracks, scrolls, curvilinear motifs, and diamond crosses; sometimes, incorporating a crocodile motif done at various levels of abstraction.