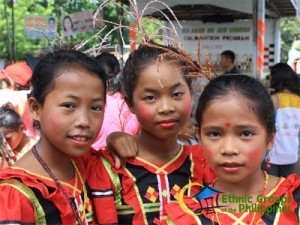 TAGUM, Philippines – More than four years ago, I was fortunate to visit the wonderful community of the Ata people in Talaingod, a second-class municipality in Davao del Norte. Endowed with a breathtaking view and mountainous landscape, the Atas live a modest life and rely mostly on farming for daily survival. That day, the reverberating sound of the drumbeats set the jovial ambiance of the plaza as the Ata celebrated the Kalibulungan Festival donned in colorful tribal garb.

The Ata Manobo can be found in the northwestern portion of Davao del Norte, as well as in Bukidnon and Compostela Valley. They are further subdivided by the National Commission for Culture and the Arts into three groups, namely, Dugbatang, Talaingod, and Tagauanum. Generally identified as the Atas of Davao, they are concentrated mainly in the municipalities of Talaingod, Asuncion, and Kapalong, with an estimated population of more than 30,000. The Datu or chieftain is a recognized village leader and holds the utmost authority over his people.

Some of the Atas resemble the typical facial characteristics of the Aeta in Luzon, although a 1997 report by Heide Gloria and Fe Magpayo concluded that they are not the same as the Aeta or Negritos. Rather, the Ata are a mix of Negrito and Malay people. This perhaps explains why some have dark skin and curly hair, while others have fair skin and straight hair. Though they are divided into different subgroups, they speak a shared language called Ata and can fully identify with each other.

According to anthropologist Fay-Cooper Cole, the name “Ata” refers to a person who dwells in very high places or at the peak of the mountain. Most of the territories of the Ata are underdeveloped, although recent provincial government efforts have been established in some communities, particularly in Talaingod. Slash-and-burn agriculture was once practiced by the tribe, but due to the deterioration of the land and depletion of food sources in the surrounding areas, the majority turned to trade and contour farming. Additional sources of income include abaca gathering and basket-weaving or liyang.

For generations, the Ata women have mastered the art of making liyang, a woven basket used for harvesting or for wood gathering. A liyang is made of abaca, rattan (uway), and a bamboo tree (bagtok), which are all harvested in the forest. Collecting raw materials alone entails hours of walking into the woods through a rugged track, while the arduous weaving of a full-size liyang takes about three days to finish. Most of these products are sold at the market or to nearby towns, as well as during special events like festivals.

The tradition of weaving liyang has been handed down through different generations by Ata elders. Children grow up watching their mothers weaving liyang, and thus learn through observation and training. Today, most of the experienced weavers are educating their offspring to preserve this ancient yet vital custom of the Ata tribe. They are confident that the continued practice of their culture and traditions, such as liyang-weaving, will remind the future generations of Atas of their roots.