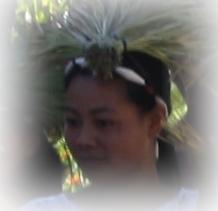 There are coastal, river, and mountain Tiruray clans, each of which has variations in dialect. In fact, Tiruray is a combination of tiru (“place of origin, birth, or residence”) and ray (from daya, meaning “upper part of a stream or river”). Their language, another distinct ethnolinguistic group, is structurally related to those of the Malayo-Polynesian family but is unintelligible even to their immediate neighbors. The majority of Tiruray habitations are in Upi, South Upi, Dinaig, and Ampatuan in Maguindanao (ARMM), plus scattered populations in Sultan Kudarat and North Cotabato (SOCCSKSARGEN Region).

The primary source of income for coastal Tirurays is farming, hunting, fishing, and basket weaving; those living in the mountains engage in dry field agriculture, supplemented by hunting and the gathering of forest products. Tirurays are famous for their craftsmanship in weaving baskets with two-toned geometric designs. While many have adopted the cultures of neighboring Muslims and Christians people, a high percentage of their population still believe and practice their indigenous customs and rituals.

Sources
Ethnologue, www.ethnologue.com/
National Commission For The Culture And The Arts, http://www.ncca.gov.ph/