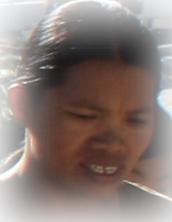 The Buhid tribe is one of the eight Mangyan tribes of the island of Mindoro, whose handmade pots and unique writing script set them apart from the other Mangyan tribes. Buhids can be found in Roxas, Bansud, Bongabong, and some parts of Mansalay, all in Oriental Mindoro, as well as in San Jose and Rizal, both in Occidental Mindoro. The name of their tribe, Buhid, literally translates to “mountain dwellers.”

Buhids make their living mainly by selling their pots to other Mangyan tribes, as well as by growing rice and root crops, such as garlic.

The Buhid tribesmen speak the language of the same name, Buhid, which is related to the Bangon, Batangan, and Bukil languages. There are around 9,300 Buhid speakers, who can be found in the towns of Malfalon in Calintaan, Occidental Mindoro; in the barrios of Rambida, Socorro, and Batangan in Oriental Mindoro; and in Bato Eli in Barrio Monte Claro, San José Pandurucan on the southern bank of the Bugsanga or Bisanga River. The Buhid language has two dialects—the eastern and the western dialects.

As for their writing script, the Buhid script is an indigenous Brahmic script that is closely related to baybayin and has its own Unicode block. This writing script is thought to have descended from the Kawi script of Java, Bali, and Sumatra, which have all originated from the Pallava script, a southern Indian script derived from Brahmi. Furthermore, just like with the Hanunuo, Buhids in some areas in Mindoro retain a pre-Spanish syllabic writing system.

The Buhid script is a type of abugida or syllabic alphabet, wherein each consonant has an inherent vowel [a] and the remaining vowels can be distinguished by separate letters or by diacritics. The writing direction is from left to right in horizontal lines.

Buhids are famous for their pottery making, so much so that other Mangyan tribes, such as the Alangan and Hanunoo, buy their pots from them.

Aside from their pottery, the Buhids are also known for their lyrical poetry called ambahan or urukay, written on bamboo slivers. The ambahan is usually performed with instruments such as guitars, fiddles, flutes, and Jew’s harps.

Female Buhids often wear a woven black and white brassiere called linagmon, paired with a black and white skirt called abol. Unmarried women are distinguished by their body ornaments, including the lufas, or braided nito belt; blue thread earrings; sangbaw, or beaded headband; uksong, or beaded bracelet; and siwayang or ugot, which is a beaded long necklace.

On the other hand, the men wear g-strings as well as body ornaments, such as a long beaded necklace; ugot, or tight choker; and uksong, or beaded bracelet.

Lastly, both male and female Buhids use an accessory bag bay-ong to carry their personal things, such as a comb or a knife.