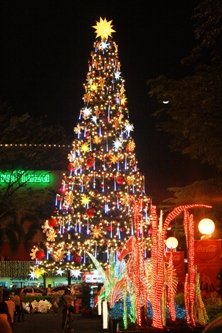 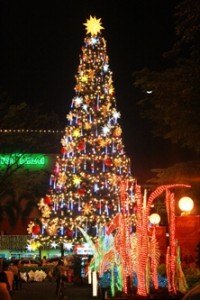 MANILA, Philippines – In addition to having one of the longest Christmas celebrations in the world, The Philippines has a unique way of celebrating this holiday. It may seem odd to a foreigner, but when the first “ber” month, September, arrives, stores and malls start to play Christmas songs and carols. Houses and streets are lined with Christmas lights in an assortment of colors. The Christmas tree and the Parol also draw attention. The parks are filled with people from various walks of life, enjoying the food, amusement park rides and the time they can spend with their families. Since there are approximately two weeks of vacation starting December 16, the children and adults sing carols from house to house for fun or as a way to augment income. Early carolers report, “More and more home owners say, ‘tawad, sa Pasko na,’ words which literally mean, ‘Forgive us, on Christmas Day.'” This is what people say when they mean that they will give the carolers candies food or cash, but not until Christmas Day.

December 16 signals the beginning of the “nine mornings mass,” or novenas. There is a belief that the prayers or wishes of a person who completes the nine mornings mass will be granted. A parishioner at one church relates, “Last year I was able to complete the nine mornings mass and after a few days my wish was granted.” Another parishioner adds, “Two years ago I completed the novena and my wish was granted two years later. I believe that our prayers will be granted not only when we complete these masses, but also by changing our attitudes for the better, by doing what is right, and by being kind toward other people. ” She continues, “Alright, enough with the talk, It is time to eat puto bumbong or bibingka,” as she walks to the stall selling these two native delicacies which are commonly sought out and eaten after the mass.

It is the season of merry-making and the Christmas bonus. There are parties everywhere. Whether in school, an office, a house or within the neighborhood, gift exchanges called monitor/monita are common practice. Those who have their family and relatives in the province make it a point to go home and bring their presents with them.

The season does not bring only good news. Although it is the time when the cautionary advertisements urging “Take care of your belongings” are most complied with, it is also the time when unscrupulous individuals take advantage of the cheerful atmosphere. Thieves blend in well in crowded places such as the malls, parks, and even buses waiting for the perfect time to strike a victim.

There are families who do not have a house of their own and spend their Noche Buena on the cold pavement of a dark alley or worse, families spending Christmas with an empty stomach with parents telling their children, “Christmas is just one day and just like an ordinary day, it will be over soon.”

Despite this and the fact that millions of Filipinos have trouble making ends meet, they celebrate the holiday season with vigor and a simple feast. And Christ, the center of the holiday season, brings optimism to the hearts of many.