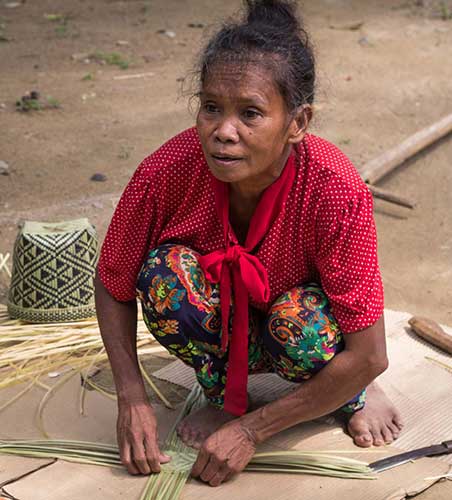 PUERTO PRINCESA, Philippines – Living primarily in the northern part of the island of Palawan, the Bataks are said to be the oldest indigenous tribe in the Philippines. Researchers suggest that they are the first humans to cross through land bridges that connect the archipelago with mainland Asia.

Estimated to number only slightly more than 2,000 people in 1990 census (Ethnologue), the Batak people are the most threatened among the ethnic groups residing in Palawan. Recent statistics have revealed their populations have plummeted to only about 400 or less as they assimilate with the rest of the population.

Due to their physical appearance, such as their small stature, dark complexion, as well as their short and kinky hair, they have been classified by anthropologists as part of the Philippine Aeta group. They speak Batak or Binatak language in addition to Tagbanwa and Cuyunon.

Batak is an old Cuyunon term meaning “mountain people.” They live in small settlements near the coastal villages of Tinitian, Babuyan, and Malcampo. Back in the day, majority of them led a semi-nomadic way of life, gathering food from the nearby forests and rivers. Nowadays, many reside in small settlements far from their native territory as they become increasingly populated.

The Batak people are among the oldest known tribes of the Philippines that crossed the land bridges more than 50,000 years ago. They have been trading forest products and bartered goods with the Chinese and Muslims long before the 20th century.

Most of the Bataks today augment their daily needs through upland farming, harvesting and selling different non-timber forest products, such as tree resin, rattan, and honey. Since the majority have no access to education, people have no steady work or income and life is rather challenging.

Reminiscent of the neighboring Tagbanwas, the Bataks are known for their craftsmanship through traditional basket-weaving and mats, which are popular among tourists. Basket-weaving is a skill acquired by the Batak women from their early years, with materials from forest products such as rattan and bamboo. Among its basic designs are the kawa-kawa, libo-libo, bianig, tinlo pinalagsanan, and timogrok, each one with designs corresponding to their common functions.

Over time, new migrants have settled among them, resulting in drastic changes in their community. Much of their traditional culture have been lost as they assimilate further with the rest of the population. The growing demands and competition for forest resources pushed the Bataks deeper into remote areas, which are often inaccessible to social services. As a result of poverty, diseases such as malaria, tuberculosis, and malnutrition have also plagued the tribe, subsequently reducing their population.

Intermarriage between neighboring Tagbanwas and Cuyunons have diminished the pure-blooded Batak population, who often disregard their own culture and traditions, hence losing their tribal identities. Currently, only three unmixed families were recorded in one of the three predominantly Batak communities. Furthermore, it is customary amongst its male members to transfer to their wife’s previous place.

Although the Batak population are quickly diminishing, several organizations are helping the tribe in an effort to reestablish its Binatak language through developing their own mother tongue curriculum in schools. Moreover, an annual celebration called Tarek Festival is commemorated every third week of January in Palawan to showcase the Bataks’ traditional dances. It also displays the tribe’s woven clothing and handmade accessories.

Tarek is a pre-planting ritual amongst the tribe. A male babaylan (“shaman”) mediate to appease the spirits through music and dance in ceremonial performances. Before the dance, food and animal sacrifices are placed on the altar as an offering to ask the spirit of the fields for a good and bountiful harvest.