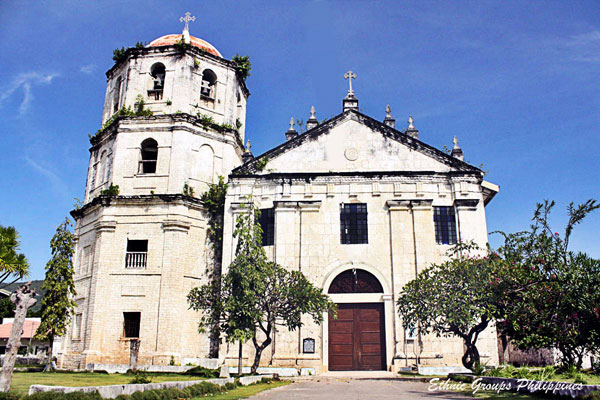 QUEZON CITY, Philippines – Oslob: an idyllic countryside, perfect for those who want a quick getaway from the urban hustle and bustle; a small town, rich in history, that recently became world-famous for its whale sharks, which can be seen in very few coastlines.

Located in the southernmost tip of Cebu island in the Visayas, Oslob is just a few hours away from city life— the perfect destination for those who yearn to unwind. The salty smell and gentle night breeze that waft through the window of a cottage by the beach are balms for a tired mind. Oslob used to be called bolocboloc for its natural spring near the shore. The Spanish colonizers changed its name to “Toslob,” a Visayan term meaning “soak” or “dip”; this was later shortened to Oslob. The town was born in 1844.

A stroll through the town proper of Oslob brings one back to the Spanish era because of the many ancient buildings and ruins in the area. Aragones Street, for example, has an incomplete cuartel built in 1879 as barracks for Spanish soldiers. Its thick walls made of coral stones were meant to protect the soldiers from Moro (Muslim) invaders. However, the construction was stopped when Spain ceded the country to the Americans in 1899.

A few meters away from the cuartel is Nuestra Señora de la Inmaculada Concepcion, the National Heritage Church of Oslob that was built in 1830. This site was designed by Bishop Santos Gomez Marañon, who had also created the famous Magellan’s Cross in Cebu City. The facade is simple; on the left side is a gigantic bell tower and on the right, the ruins of a monastery that had been connected to the church. Fray Julian Bermejo, to whom the construction of the present church was credited, was an Augustinian priest who organized a military defense system to fight Muslim raiders. Recently, in March 2008, the church was badly damaged by an eight-hour fire and is yet again undergoing major reconstruction.

When walking from the church to the beach, one encounters an open space with lush gardens called the Heritage Park. This is the perfect place to chill in the afternoon, where one can sit on a bench under a tree and enjoy the fresh air of the open sea. A few steps from the park is one of the seven watchtowers or baluartes that were built along the coastline of Oslob. Made of coral stones, this baluarte was built by Fray Bermejo in 1788 as the first line of defense against Muslim raiders.

Today, Oslob has become famous for its whale sharks.

The whale shark is the largest fish on Earth, and Oslob is one of the rare coastal areas in the Philippines that it frequents. As many as 14 tuki (Cebuano for whale shark) can be found in the small fishing village of Tan-awan, attracting thousands of tourists every year. There are around 50 whale sharks in the whole of Oslob; “Big Papa,” the biggest of them all, is about the same size as a Ceres bus that plies Cebu. Fishermen use brine shrimps to draw them closer to the surface for tourists to be able see them. Local tourists pay P500 to be able to swim or snorkel close to the tuki for 30 minutes. Foreigners are charged P1,000.

Meanwhile, beach lovers who want to bask the sun and splash in clear blue water have many resorts to choose from. The well-known Sumilon Island is just a 30-minute boat ride from Tan-awan. It is perfect for swimming and diving, as it has crystal-clear water, astounding reefs, and diverse tropical marine species.

For those who prefer to take in the landscape, a 20-minute drive from Tan-awan on habal-habal (motorcycles for hire) will bring the visitor to the pristine and picturesque Tumalog Falls in Barangay Tumalog. The area is surrounded by old bamboo trees, while the waterfall itself spills over the top of a wide wall of rocks covered with moss. The sound of cascading water is very relaxing. The water of the pool at the foot of the falls is clear and cool, quite refreshing on hot days.

Oslob has many great things to offer — history, architecture, adventure, and leisure. A stroll on a soft, white beach to rejuvenates the senses; a visit to the old baluarte and cuartel is a trip back in time. In this simple and quiet town, the traveller can discard the hassles of metropolitan life, albeit temporarily, while imbibing the Philippines’ rich Filipino-Spanish legacy.