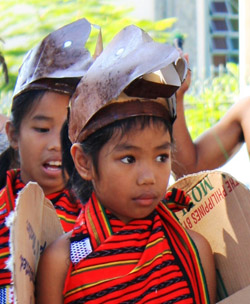 QUEZON CITY, Philippines – The Kayapa Ikalahan population was widely scattered in northeastern Pangasinan, western Nueva Vizcaya, and western Ifugao on the main island of Luzon.  Included in the generic term Igorot, meaning “mountain people”, native speakers distinguished and identified themselves as Ikalahan. In fact, many of the Ikalahan settlements were situated more than 3,000 feet above sea level, in the Caraballo mountain range; a cooler climate and heavy rainfall characterized by the mountainous terrain. The name originated from the word kalahan which refers to the evergreen pine trees and deciduous trees growing in the Caraballo mountains; the prefix “I” denotes “people” or “residents”. This ethnolinguistic group had also been identified by other names such as the Kalanggutan, Keley’I, Mandek’ey, Yatukka, etc. It had been popularly, if not, unintentionally, christened Kalangoya till it was replaced in 1969. Those who reside in the Tinoc and Bugulas regions still recognize themselves as Kalangoya, where as those in the Nueva Vizcaya and Quirino locale prefer to identify themselves as Ikalahans. Coloquially, kalangoya is both derogatory and connotes laughable insinuations. When spoken in full, kalangoya would be “Kelay Ngo Ya?”, and would loosely translate as “What in the world is that?” or “What the hell is the matter?”, an expression that non-ethnic individuals “love” to vocalize with mischievous intent.

The household, hampangabungan, is the basic social and economic unit of the Ikalahan society, consisting of the husband, wife, their children, and, if any, elderly parents of both sides residing in the same house, simultaneously, sharing the day-to-day tasks. Sometimes, newly married couples would live in the parents’ house till such time they’ve a obtained a house of their own. The kinship group, by contrast, was a bilateral grouping of kindred “extending beyond many of the general kinship systems, in that brothers and sisters of affinal relatives were included as collateral relatives” (Rice, 1976:66). The recognized kinship boundary, however, varied; sometimes, gauged maximally, extending beyond third cousins. Still, other times, it might be limited to second cousins only. Affluent, prominent, and distant relatives were usually included to the kinship group because they accorded honor and prestige to their distant kinsmen.

Ikalahan society recognized two classes of people: The rich, baknang or kadangyan, and the poor, biteg or abiteng; the distinction, however, oft times difficult to determine. Wealth was generally measured in terms of animals and land properties, yet, an individual’s wealth did not place her/him in a position of political influence within the community. Economically, the wealthy wield greater influence on financial decisions, largely due to their affluential distinction.