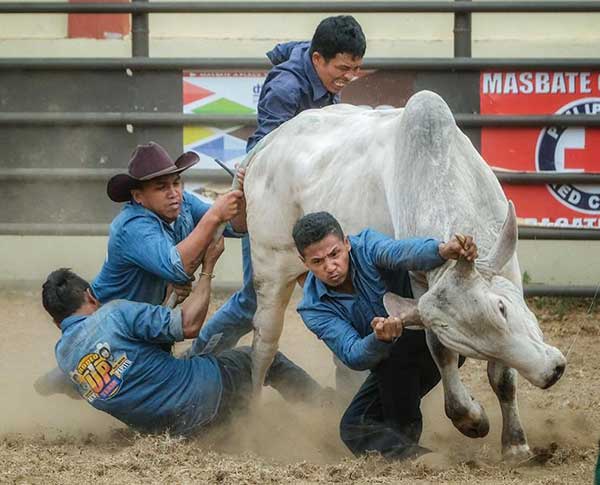 MASBATE CITY, Philippines – Masbate Province is located at the center of the Philippine archipelago, between the Bicol and Central Visayas Regions. Its crystal-clear waters and underwater adventures were relatively unknown to tourists until recently. The vast rolling hills and fertile soil make Masbate a perfect ground for cattle production. In fact, the region is known as the Cattle Capital of the Philippines and launched the only rodeo event in the entire Asian continent. In addition, Masbate is recognized as the second largest producer of meat in the country.

Cattle production has been a popular trade in Masbate since the Manila–Acapulco trade during the 16th to the 19th centuries. Back then, cattle were brought in from Mexico and have since played a major role in the region’s economy. As a result of the widespread migration and assimilation of various ethnic groups from nearby provinces who settled in the island, the people of Masbate speak one of the most diverse and complex languages in the country.

Masbate Province is composed of three major islands, namely, Masbate, Burias, and Ticao Islands. The interesting culture of the Masbateños has been greatly influenced by their adjacent neighbors due to their geographic location. Most of them are settlers from the neighboring provinces, such as Panay Island and Romblon. Their main economic activities are agriculture and fishing, although in recent years, Masbate Island has been known as the site of the greatest gold production in the world.

The Masbateño language, also known as Minásbate, is a mixture of Visayan, Bicolano, and Tagalog. It is estimated to have more than 700,000 speakers and is used primarily at home by about 60% of Masbate residents, followed by Cebuano, Hiligaynon, and Bicolano. Masbateños speak various other languages depending on where they live. People on the north side of the island speak Masbateño, while those on the south side speak Cebuano similar to the languages spoken in Cebu. Inhabitants located on the west coast speak both Hiligaynon and Capiznon, while variants of Bicolano and Visayan are used by those in the Ticao and Burias Islands due to the abundance of Bicolano and Visayan migrants in the island in the 1960s.

Over the years, Masbate Province has become synonymous to the rodeo festival called Rodeo Masbateño, where hundreds of homegrown cowboys participate. This week-long festival launched in 1993 has been held annually during the month of April, aiming to showcase the province’s identity. This unique celebration depicts the culture of the Masbateño cowboys, who flock to the city in their rodeo outfits and showcase their bull riding, cattle wrestling, and lassoing skills. Some of them have even competed in international rodeo festivals, such as the National Rodeo Finals in Las Vegas.

The festival also serves as a vehicle to promote Masbate as a tourist destination. Following its launch, there has been a tremendous increase in visitors to the island, including Masbateños living in faraway places. Apart from expanding its tourism and livestock industry, the festival’s greatest legacy is to expose and encourage the younger generations of Masbateños to keep their vibrant culture alive.

Other significant festivals held in the region are the Pagdayao Festival and Lapay Bantigue Dance Festival, celebrated in June and August, respectively. In addition, there are plenty of activities to do in many parts of the island, as it never runs out of beautiful scenery and historical landmarks just waiting to be explored.

When it comes to food, Masbateños are passionate about their cuisine; they pride themselves in making the most delicious bulalo and sinigang, which gets its sour kick from a unique ingredient called batuan. Another must-try when in the region are their delectably sweet Carmelado, which are milk candies made from carabao’s milk and sugar, and a dessert made from sweet potato or pili nuts called molido.