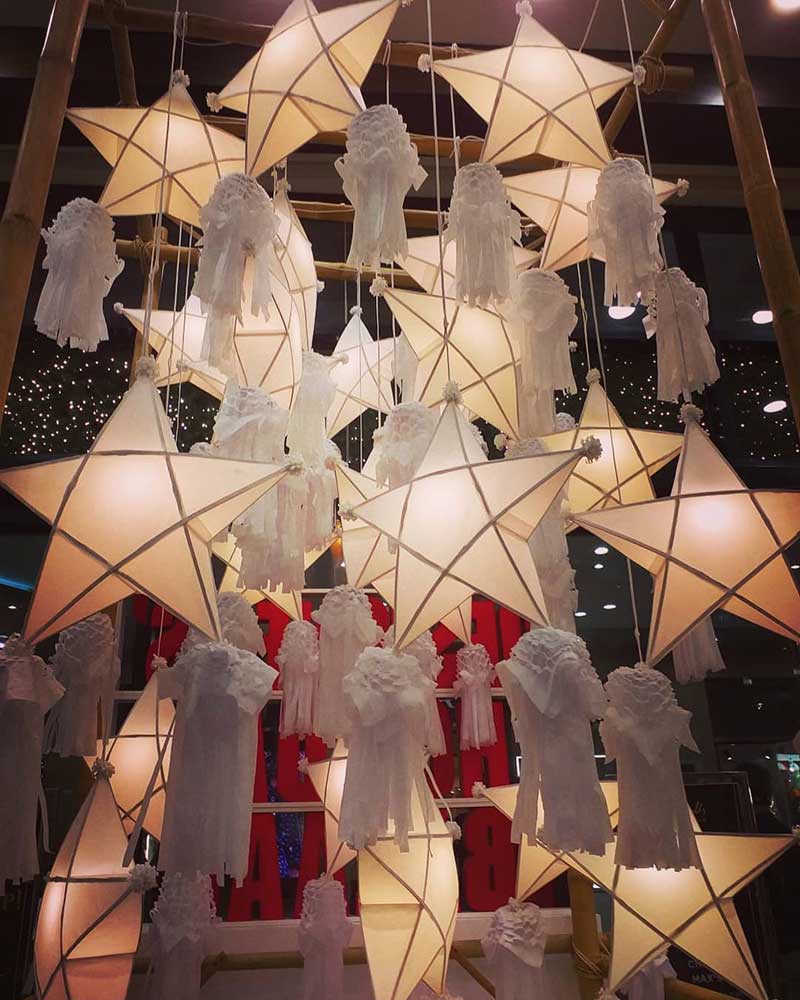 MANILA, Philippines – The month of September marks the beginning of Christmas season in the Philippines. A holiday dear to every Filipino’s heart, Christmas has always been a big celebration in the country. It is when families come together and celebrate the blessings of life. Thus, the planning and preparations for the annual fete begin as soon as the “–ber” months arrive, and the Christmas celebration spans 4 months until the celebration of the Epiphany in January of the following year. Indeed, nobody in the world does the holidays quite like Filipinos.

Starting September first, it is not unusual to see malls already lined with bright lights and colorful trimmings, with Christmas music playing everywhere despite the fact that Christmas is a few months away. One of the obvious signs that Christmas is here is when lanterns called parol adorn the streets and serve as night lights. They’re usually star-shaped, but nowadays they come in a variety of shapes, sizes, and designs.

Christmas is also when many of the 12 million overseas Filipino workers (OFWs) as well as those who have already migrated abroad usually come home for the holidays. A big surge is expected in the number of inbound flights to the Philippines bearing mostly OFWs who have come home to spend the holidays with family and friends after months or even years of hard work in another country. Additionally, December is recognized as OFW Month, since it coincides with the celebration of International Migrants Day, honoring their rights and contributions.

Of course, food is a very important part of the holidays. As early as September, the presence of the purple-colored rice cake or puto bumbong is already visible in stalls. Regarded as kakanin or sweets made of glutinous rice and coconut milk, puto bumbong and bibingka are two prominent snacks that are associated with the Filipino holiday season. Introduced during the Spanish colonial period, kakanin are believed to fill the need for a heavy breakfast among farmers who wake up before the break of dawn to attend mass and subsequently head to work in the fields.

A popular tradition among children is the aginaldo or gift-giving rooted from the Spanish word aguinaldo meaning “Christmas bonus.” It pertains to cash gifts handed over by godparents to their godchildren in the form of crisp new bills in envelopes. Most often, people notify their banks beforehand and order newly printed notes in time to distribute to their godchildren by Christmas.

Perhaps the cooler weather is what excites most Filipinos during the “–ber” months. As a tropical country, the Philippines is hot and humid all year round. However, the arrival of the “–ber” months means cooler evenings and early mornings as the temperature drops to 25 degrees Celsius (77 degrees Fahrenheit) from the usual 30 degrees Celsius. Although a quick downpour is likely to happen, the frequency of typhoon visits reduces as the year comes to a close.

One surprising fact is the prevalence of weddings during the “–ber” months. In a study conducted by a bridal studio, December has become a popular choice for weddings, replacing the traditional wedding month of June. This is because this month is a little bit colder and drier compared to the rest of the year, not to mention the homecomings and reunions that are usually scheduled for this month.

The “–ber” months have an exceptional vibe compared to the rest of the other months. Filipinos have always loved celebrations and would grab any opportunity for family and loved ones to be together. Even though it is the busiest, most hectic time of the year, Christmas is the merriest season for many Filipinos. With the homecoming of families and friends from out of the country, Filipinos plan ahead to make sure their celebrations are memorable ones.