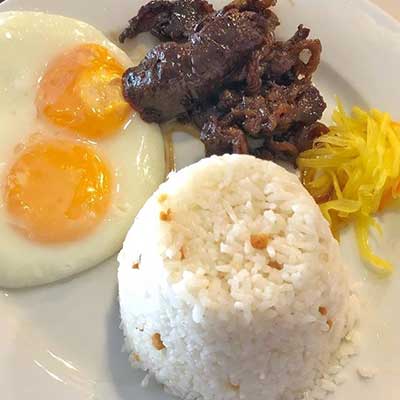 MANILA, Philippines – Breakfast, lunch, and dinner with merienda and pica-pica in between is how we Filipinos do it! As a child, our mother will always remind us to eat on time and how breakfast is the most important meal of the day as it gives you the energy you need to get things done. Although oatmeal and cereal, which are considered Western breakfasts, have long been available in the country, we have been taught that a real meal includes rice. Yes, a true Filipino breakfast is not complete without rice. An iconic traditional breakfast, particularly popular in the capital, is tapsilog.

Tapsilog is made up of marinated beef slices (tapa), fried garlic rice (sinangag), and egg (itlog). The name tapsilog is thus a portmanteau of these components. The beef is seasoned with a special sauce that gives its savory flavor and chewy texture, while the rice is fried with plenty of garlic that add to its aroma. Leftover rice, specifically day-old rice, is favored over freshly cooked rice, because the drier consistency of the day-old rice makes the resulting sinangag have a better texture. A sunny-side up egg completes the basic trifecta. To complement the dish, vinegar or pickled papaya (atchara) is sometimes served.

According to some sources, the word tapa comes from the Sanskrit word tapas meaning “heat.” Since the pre-Hispanic era, Filipinos have preserved strips of meat by drying them under the sun. When the Chinese merchants arrived, they introduced soy sauce, as well as their cooking techniques, such as stir-frying. The locals were thus introduced to their famous fried rice, a dish that originated during the Sui Dynasty in China. Filipinos, being resourceful and creative, learned to preserve leftover rice by making their own version, which they called sinangag.

Tapsilog became popular in Manila during the late 1980s, when carinderia (small food stall) and tapsihan or tapsilogan (a restaurant that primarily serves tapa) became widespread due to urbanization. Because the dish is both easy to make and satisfying, it quickly turned into a favorite meal choice. Different restaurants and chains came up with their own versions of tapsilog, with others even offering 24-hour delivery services. Tapsilog is especially popular among students because the dish is not only inexpensive but also one of the quickest foods to be served.

Nowadays, from upscale restaurants to budget-friendly ones, tapsilog is part of almost every menu. Over the years, it has also evolved, and many variations have been adopted by Filipinos. The tapa has been swapped out for other dishes, although the fried rice and egg are still present. Some classic variations include tocilog (tocino), longsilog (longganisa), dangsilog (danggit), while more modern variations include litsilog (lechon), tangiguesilog (tangigue), bacsilog (bacon), spamsilog (spam), hamsilog (ham), and cornsilog (corned beef).

Over time, tapsilog grew to be a part of every meal whether it is breakfast, lunch, dinner, or even merienda. It is also famous as a recovery food for midnight owls who crave for food after a drinking session or those who simply want to satisfy those hunger pangs after a night out. Since the Philippines is composed of more than 7,000 islands, one can expect variety in taste, as different regions have their own approaches to making tapsilog.