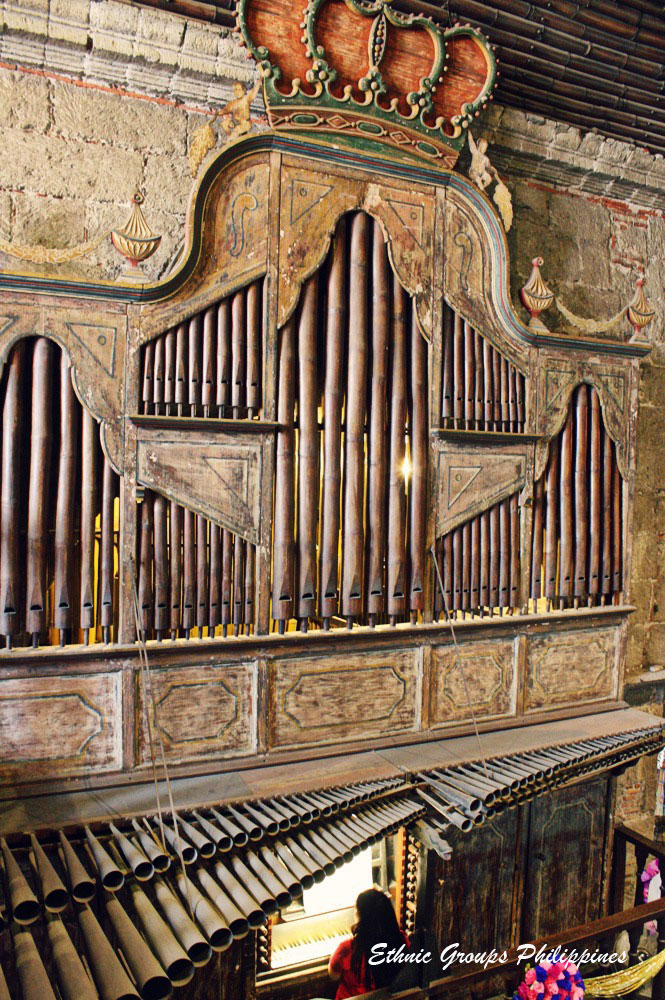 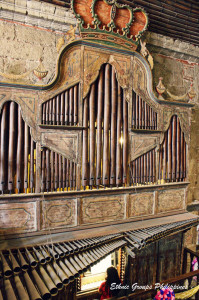 LAS PIÑAS, Philippines – For two centuries, an exceptional, beautiful music has been emanating from the suburb of Las Piñas, a city located in the southern part of Metro Manila. Crowds from all over the world frequent the annual musical and cultural event that commemorates the captivating melody of the historic bamboo organ. The 200-year-old pipe organ was founded by the Augustinian Recollect priest-musician Father Diego Cera in 1816. It was designed to accompany the singing of the congregation in liturgy, a Western musical tradition introduced during the Spanish occupation.

The bamboo organ is made of 902 bamboos and 129 metal pipes that generate a clean and flute-like sound, distinct from other organs. It is a one of a kind creation that is presumed to be the oldest and most complete in the country, and possibly in the world. The organ is a big instrument, weighing 3.5 tons and positioned on the left side of the St. Joseph Church where an organist is seated on an elevated balcony. Originally, the pipe was designed to be entirely made of bamboo; however, unsatisfied with its outcome, Father Cera replaced the horizontal trumpets with rim pipes, which emphasize the organ’s distinct mellow sound. Different sounds are produced by pulling the knobs as well as the effects of pajaritos and tambor.

Reminiscent of the multifaceted history of the country, the bamboo organ went through a lot, withstanding storms and wars. It was damaged by a typhoon in 1880 and was out of order, with several parts missing along with its gradually deteriorating condition. Fascinated by what they found, an interested member of the private sector with a passion to revive the instrument asked for the government’s assistance and raised funds for its immediate restoration. It was flown to Bonn, Germany, where it was carefully restored for two years. A jubilant homecoming was organized in 1975 with the parish community for the return of the bamboo organ in St. Joseph. This event marked the beginning of the Bamboo Organ Festival. 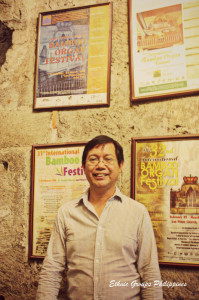 The very talented Organiste Titulaire of the Bamboo Organ, Professor Armando Salarza is one of the main reasons why people continue to hear the wonderful melody of the 18th century organ. He began training at age 7 and performed his first public recital at 11. At age 14, he became the official accompanist of the Las Piñas Boys Choir. He was appointed as the primary scholar of the Bamboo Organ Foundation and graduated with honors at the University for Music and the Performing Arts in Graz, Austria. Prof Salarza pursued a post-graduate course afterward while taking various workshops, where he was mentored by famous teachers in classical music.

Although he is an acclaimed concert organist in Europe and in the United States, Prof Salarza chose to come back to his native land with the hope of reviving what has been started by the Bamboo Organ Foundation to keep the bamboo organ alive. In addition, he is also able to share his talent through teaching, performing and as a conductor and trainer of the Las Piñas Boys choir, who in 2008 won in the World Choir games,  a worldwide choir group competition held in Graz, Austria. Despite earning a mere fraction of what he earns outside the country, his unwavering devotion to his craft and desire to promote Philippines cultural heritage is admirable. Prof Salarza is the current Artistic Director of the International Bamboo Organ Festival and a faculty at the University of the Philippines College of Music as well as St. Scholastica’s College of Music.

The longest running international music festival that showcases the unique sound of the bamboo organ recently celebrated its 41st year of playing beautiful music. Despite drawing a number of spectators, including well-known musicians from outside the country who are eager to play the organ, the majority of Filipinos are oblivious of this Spanish legacy. Younger generations prefer listening to pop music constantly played on the airwaves compared to baroque and classical music. Children’s exposure to the organ and its magnificent music is also limited, as it is not part of schools’ curricula.

The Bamboo Organ Foundation is operating on funds coming from the community, local government, and private companies. Funds have been running low for the past few years, as only a limited numbers of corporate sponsors are willing to donate nowadays. Aside from this, the local government’s budget was cut down to almost half of its original amount. Locals of Las Piñas work hard and engage in “bayanihan” or communal effort every year to restore both the church and the bamboo pipe organ so that generations to come would still be able to experience this important national cultural heritage; an instrument handed to us since 18th century that speaks of our past and traditions.

Currently, the bamboo organ is being maintained by a local organ builder, an expert in building and preserving bamboo organs who were educated in Germany. A regular use of the organ is also essential for its conservation. Prof Salarza along with the foundation hope to continue the crusade to preserve one of the few surviving wonders of Filipino culture. The bamboo organ is one of the oldest existing wonders of the Philippine musical art, a representation of our history and identity, a link to our past, present, and the future. Let us support the International Bamboo Organ Festival every year and teach children to embrace and conserve it for the coming generation.