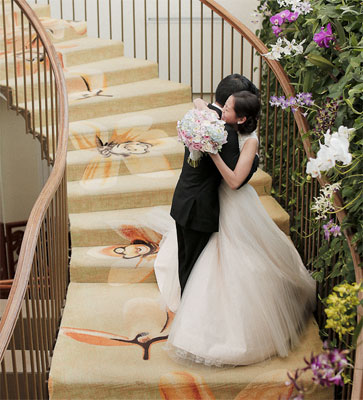 MANILA, Philippines – “How old are you again? 34? You should get married soon and have children before it’s too late.”

Believe it or not, this is a typical reaction a woman gets from older folks when they learn that she is ‘beyond the calendar stage’ – a term given to a woman who is more than 31 years old. Women of this age are said to have already missed the boat on the national marriage market, so to speak. In a country where most women settle down at the ages of 20 to 24, delayed marriages are perceived by some as unconventional.

Marriage remains anticipated by most Filipinos. A survey done in 2015 reported that on average, more than a thousand marriages are solemnized daily, whether through religious rites or civil ceremonies. In the Philippines, women settle down at an earlier age compared to their male counterparts. In 2013, nearly 4 million out-of-school youths aged 15–24 dropped out of school for matrimonial reasons, as reported by the Functional Literacy, Education, and Mass Media Survey.

In some areas in the Autonomous Region of Muslim Mindanao (ARMM), children as young as 12 years old are married off upon petition of a male guardian. It is a common practice under Muslim Sharia law that a girl who has reached the age of puberty is allowed to wed with her parents’ consent. The Muslim community makes up more than 5% of the country’s total population. Under Philippine law, a couple has to reach the age of 18 for them to become husband and wife.

Contrary to the notion that people living in large cities are not marrying, the National Capital Region  holds the record for having the highest number of marriages, while ARMM has the least number. Similar to other Asian countries, family and marriage practices in the Philippines are progressively shifting. In the last few years, Filipinos have been observed to marry later in life than the previous generations.

Fewer Filipinos have been tying the knot, as seen in the decline in number of registered marriages. In 2010 and 2015, both religious and civil weddings diminished to 11 and 16 percent, respectively. In addition, according to data released by the Philippine Statistics Office, the number of marriages have declined by 20% in the last decade and in almost all regions. Rising poverty was observed as one reason why citizens have been reluctant to get married. Making ends meet and the need to provide for their families are the top priority of many couples. The high cost of getting married has also prevented many from marrying, as the minimum cost for a church wedding would be around PhP 20,000, while the minimum cost for civil rites would be around PhP 5,000.

Other reasons that could hinder couples from settling down are the growing acceptance of living together or cohabitation, rapid urbanization, and changing mores, as well as the absence of a divorce law in the country. In a recent finding by global marketing communications brand Walter J. Thompson, 58% of Filipino women said they would delay getting married or having children to pursue their chosen career. The younger generations today are taking their time to commit, as men and women alike are now putting more emphasis on furthering their education and their careers.

Although there is a decline in marriage worldwide, the majority of people still get married, even if they get married later. According to statistics from the United Nations, 80% of men and women in many countries have been married at least once by age 49. Marriage has been associated with an increase in longevity, happier lives, more positive effects on children, and less crime.