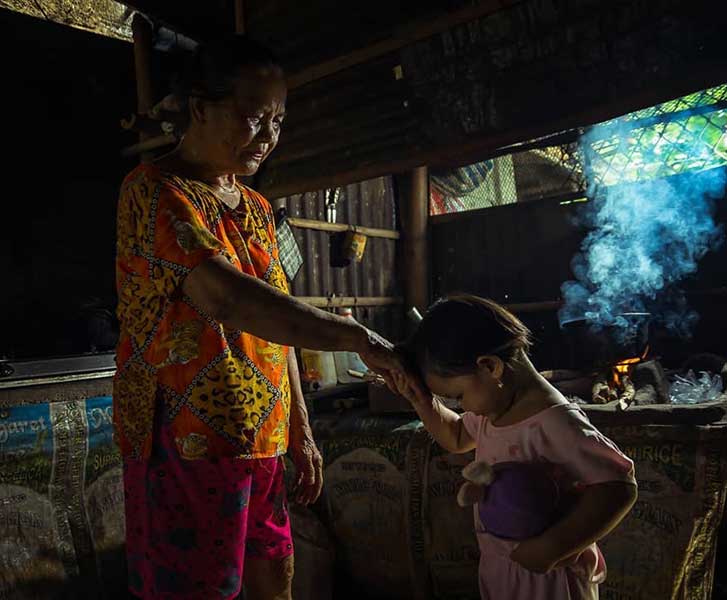 MANILA, Philippines – Filipino children, similar to their Asian neighbors, are taught to be respectful, especially to their elders. Respecting elders is taught from an early age. This is perhaps one of the most common cultural traditions that Filipino parents, wherever they are in the world, teach their kids. In today’s modern world, the way younger generations pay respect to their parents and their elders have evolved. One particular tradition that is slowly fading in the Philippines among families is the “pagmamano.”

The Tagalog word pagmamano comes from the root word mano, which means “hand” in Spanish. It is an act of paying respect to an older person by touching the back of the elder’s hand against a younger one’s forehead. Generally, this courtesy is done with the right hand and is performed upon meeting the person. The phrase “mano po” meaning “may I have your hand” is spoken by the younger individual asking for the hand while the response “kaawaan ka ng Diyos” or “God bless you” is uttered by the elderly.

According to historians, this tradition began during the Spanish occupation in the country. When the natives converted to Christianity, they showed respect to the Catholic priests by kissing their hands. Over the years, it was adopted by the natives and has become a tradition that signifies respect not only to priests but also to parents and elders in the community. In Filipino culture, one must always seek for the parent’s blessings as it is believed to bring success and protection. Pagmamano, despite it being an old practice, still lives on among traditional Filipino families regardless of social class.

Up until the late 1990s, this gesture was widespread. Children are expected to do pagmamano to their grandparents and parents as soon as they enter the house. Most often, it extends to others in the community such as older relatives, friends of family, and even strangers you just happen to meet. On special occasions, such as Christmas, young children pay respect to the elders in the family or request for the blessings of their godparents by going to their houses and doing the pagmamano.

However, pagmamano is less prevalent nowadays, especially in Metro Manila and other urban cities. Younger generations are slowly replacing it with a peck on the cheek, locally known as beso. This is a recent trend that is thought to be adapted from the European way of greeting. As it is with most of the modern world, the influx of western ideas has managed to infiltrate Filipino traditions and altered it into something more modern. While advancement is good, it is also important to continue practicing our traditions for they are rooted in our identity as Filipinos.

One observation of this transformation is during Sunday mass, when children kiss their parents on the cheek as a sign of peace, instead of the mano po gesture. The same goes upon entering a grandparent’s house where instead of pagmamano, a kiss on the cheek is offered. While some grandparents say they avoid it as it appears to be a form of submission or the gesture makes them feel old, others are quick to remark that the pagmamano was just never taught to them at home or this gesture is usually reserved for grandparents alone.