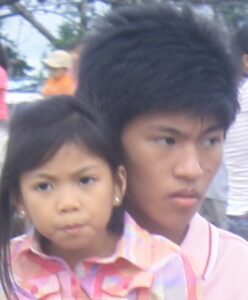 Though Masbate Province is a part of Luzon, the linguistic lineage of Masbateño leans more towards the Visayan languages, particularly Hiligaynon and Capiznon, than Bicolano or Tagalog.

Masbate is one of the biggest cattle producers in the country. In is not surprising, therefore, that the province hosts the “Rodeo Filipino” every June. The festival features bull riding and lassoing, which are common events in American rodeos.