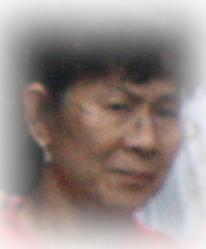 The Ubo are a Manobo sub-tribe who inhabit the more isolated mountains of Southwest Cotabato in the area known as Datal Tabayong, as well as, more southerly Davao del Sur. As of last count, they numbered close to 17,000 (OSCC, 1987); a follow up on their numbers in subsequent years has proved difficult.

Known for their intricate casting, the Ubo fashion fine weaponry and jewelry that they believe possess souls, making it harder for the maker to part with them. Agriculturally, they practice swidden, a slash-and-burn farming, oft planting and harvesting rice, root crops, and vegetables for consumption. Like the Bagobo, the Ubo believe in multiple deities headed by a central figure, Diwata (God); they're animist, they also believe in ancestral spirits and unseen beings inhabiting the animate and inanimate objects found throughout their environment. In civic matters, the political leader and Datu (Filipino chieftain) of the village attains his position by virtue of wealth; speaking ability and knowledge of customary law, known as fendan. The primary obligation consists of settling disputes among members of a family, neighbors, and the community. When a fine is set and/or imposed by the Datu, the accused has to pay it to the aggrieved party; if he's unable to, then he will become servant to the one who pays for him, otherwise known as dok.