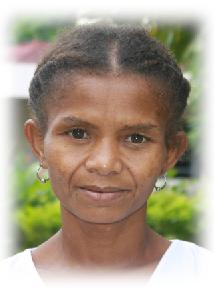 The Aytas are called Negritos for their dark skin and kinky hair. They landed on the archipelago more than 30,000 thousand years ago and are thought to be the earliest inhabitants of the Philippines. The Negritos share some physical features with African pygmy populations.

Nowadays, rare is the Ayta wearing traditional clothing: the bahag (loincloth) for men and wraparound skirts for women. They now use urban attire. Ayta women are skilled in weaving, plaiting, and producing household containers, rattan hammocks, and winnowing baskets of excellent quality. Nomadic Ayta build temporary settlements made of indigenous materials, such as forked sticks, palm or banana leaves, cogon, and bamboo.

Abellen Ayta
The Abellen Aytas are found mostly in the mountains of western Tarlac and Zambales. They have adopted the language of their Austronesian neighbors, speaking a Sambalic language that belongs to the Central Luzon language family.

The Abellen Aytas are traditionally semi-nomadic. After the eruption of Mt. Pinatubo and due to intermarriage with their Ilocano neighbors, they have spread throughout the region. However, a good number of Abellen Ayta settlements still live in remote reaches of the mountains of Tarlac Province.

Ambala Ayta
The Ambala Aytas live in San Marcelino, Subic City, Olongapo, and Castillejos in Zambales; and Dinalupihan in Bataan Province. Like the Abellen Aytas, they have largely adopted the language of their Austronesian neighbors.

Bataan Ayta
The Bataan Aytas also known as Magbukún Ayta are found in the coastal town of Mariveles, in the southern tip of Bataan Province, Central Luzon Region. Theirs is one of two endangered Ayta tribes whose numbers dwindling at a very rapid pace. Extinction looms, unless drastic steps can be taken to preserve their language and culture.

Mag-anchi Ayta
Zambales, Tarlac, and Pampanga are home to the Mag-Anchi Aytas, although most reside in Capas and Bamban, Tarlac; San Marcelino and Castillejos, Zambales; and Mabalacat, Sapang Bato, and Angeles City, Pampanga. Mag-Anchi is a Sambalic language, and is part of the Central Luzon language family.

Mag-indi Ayta
Communities of Mag-Indi Aytas inhabit Zambales and Pampanga; they are predominantly found in Florida Blanca and Porac, Pampanga; and San Marcelino, Zambales. Like Mag-Anchi, Mag-Indi is also a Sambalic language.

Sorsogon Ayta
In the Bicol Region, the Sorsogon Aytas reside in Prieto Diaz, a municipality located in the province of Sorsogon. They are, by far, the most endangered group of the Ayta population; only few remain today. Unless radical steps are taken to preserve their language and culture, the Sorsogon Ayta will become extinct in the coming decades.