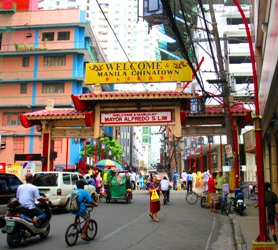 GUANGZHOU – Chinese had been living in the archipelago that was to become the Philippines long before the islands were overrun by Spanish colonizers. However, the specific era of the Chinese migration to the Philippines is unknown because no statistics are available. Chinese make up 2-4% of the country’s population, and most of them belong to either the Fujianese or Cantonese dialect groups. Field research on the tombstones in Chinese cemeteries nationwide revealed that nearly 89% of those who were buried were Fujianese; 10%, Cantonese; and 1%, other groups. (The Philippines is not a traditional prime destination for Cantonese migrants.)

Southern Fujian has three main dialects: Quanzhou, Xiamen, and Zhangzhou, the accents of which vary slightly from one to the other. Most Fujianese were originally from Quanzhou (75%) and Zhangzhou (23%). The majority of Chinese in Metro Manila speak Minnan, a Quanzhou variant; those in southern Philippines speak Xiamen, another variant. On the other hand, many Cantonese are from Taishan, the hometown of thousands of Chinese living overseas. There is also a minority of Cantonese who have Portuguese ancestry; they are called Macanese. Some Cantonese ghettoes are found in Manila’s Santa Mesa and Tondo districts.

Most Chinese are urban dwellers, and about 60% live in Metro Manila. The rest can be found in the other larger cities, such as Cebu, Davao, and Baguio. The Chinese’s preference for urban centers is closely linked with their means of livelihood. A great number of Chinese are engaged in business, ranging from small retail shops to international corporations; several well-known taipans are at the helm of multinational companies in the Philippines.

The Chinese in the Philippines are overwhelmingly Christian, although many continue to practice traditional Chinese religions alongside Catholicism. Buddhism, Taosim, and ancestor worship are the traditional religions that still have adherents in the Chinese community. Buddhist-Taoist temples and even some small places of worship (where people burn incense, offer fruits and paper money to their ancestors, and pray for peace and good luck) can be found in Chinese communities, especially in urban areas like Manila. They deeply believe that the spirits of their ancestors, if treated properly, are benign and will bring them good fortune. To be sure, the traditional religious practices of Chinese in the Philippines have been greatly tempered compared with those of mainland China and Taiwan due to the blending of philosophies. Moreover, the younger generations have tended to embrace Christian beliefs and the western lifestyle.

The older generations, which have been steeped in traditional Chinese culture, still use the Chinese language as their chief communication instrument. Their number is still large enough to support five Chinese newspapers in the Philippines. Community news about weddings, births, deaths, professional preferment, a company’s opening ceremony, and Chinese associations’ inaugurations are published in traditional style on the Chinese newspapers. It can be seen as a way to maintain Chinese culture inside the Chinese community.

The Filipinization policy of former President Ferdinand Marcos ordered Chinese language schools to close their doors or limit the time allotted for subjects pertaining to the Chinese language, history, and culture. As a result, the Chinese born during or after the Marcos era, though they could still speak Minnan or Cantonese, were no longer as adept with the Chinese language. The situation did not improve much when President Corazon Cojuangco Aquino assumed power in the 1980s, despite her encouragement of a free press and cultural harmony. Chinese born after 1990s are quite comfortable with English and Tagalog (or another Philippine language, depending on their location), although they still identify themselves as Chinese.

It is difficult to trace the whole image of Chinese culture and arts. Some older Chinese still adhere to the traditional, such as Chinese calligraphy and painting, and their works are often exhibited in local museums. Younger Chinese artists are more Filipinized or westernized.